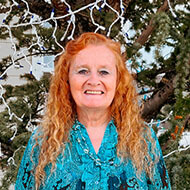 Before beginning her life as a teacher, Linda worked as a geologist for the International Nickel Company in Sudbury, Ontario, a job that prepared her to teach science to children and adults. Linda began her Montessori work as a parent, then an assistant at Appletree Montessori School in Arvada, CO where her two children attended. After completing her Early Childhood training at MECR in Boulder, CO in 1988, Linda moved with her family to Reno, NV. She received a position teaching elementary children at Cambridge Montessori School where her two children attended as well. In 1989-1990, Linda attended MTEC/SFBA in San Leandro, CA where she received her Elementary I credential. In 1996, Linda received her Elementary I-II credential so she could work with upper elementary students, also about the same time she began her work at MTEC/SFBA as an elementary instructor. In 1999, Linda moved to California to become the Assistant Director of MTEC/SFBA, a position that she had to leave in 2001 and return to Reno, NV. In 2002, Cambridge Montessori closed its doors and Linda moved to High Desert Montessori Public Charter School. Linda taught lower and upper elementary children and adolescents until 2008, when she became the assistant principal at HDMS. She retired from HDMS in 2015, but continues her teacher training position with MTEC/SFBA. She is now homeschooling her two grandchildren, ages 16 and 11. Linda has also written many manuals for the training program and is currently working with Montessori R&D to develop Montessori materials.